The list of projects that voters approved in 2012 as part of the Safe, Clean Water and Natural Flood Protection Program is moving forward. The Santa Clara Valley Water District Board of Directors approved the plan for the program’s next five years, the middle section of the 15-year parcel tax which sunsets in 2028.

Five years into the program, the water district has hit several milestones, and is looking forward to many more during the five-year period of Fiscal Years 2019-2023. The fiscal year runs from July 1 to June 30.

The program includes five priorities that guide which projects receive funding from the parcel tax. Those priorities are:

Many of the projects have already begun. Below are some key accomplishments on projects from the first five years of the program. Learn more about each project by clicking on the links.

Evelyn Bridge Fish Passage Project: The water district completed construction of the Evelyn Bridge Fish Passage Project within Stevens Creek in FY16. The project removed two structures, thereby increasing the rate that sediment moves through the series of bridges and creating a sustainable low-flow channel for fish passage. In the next five years, multiple milestones for projects under this priority (Priority D) are expected, including a project to separate Almaden Lake from Los Alamitos Creek and the Bolsa Fish Passage Improvements, which are scheduled to complete design and be ready for construction.

Trash removal projects: Of the seven projects in Priority B, five include trash removal components, with the goal of reducing contaminants in our local waterways and bays. This work is accomplished not only by the water district, but with the help of volunteers and grantees alike. In the first four years of the Safe, Clean Water Program, the water district recorded approximately 4,182 tons of trash removed from our waterways. 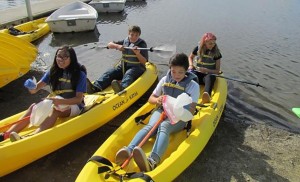 Safe, Clean Water stewardship grants: In the first four years of the Safe, Clean Water Program, through Priorities A, B and D, the water district awarded more than $7.6 million in grant funding toward projects exceeding $14 million. These dollars went to local grantees for projects addressing issues such as water conservation, water quality, green initiatives, storm water pollution reduction, storm water quality, trash removal and reduction along our waterways, restoring wildlife habitat, and providing access to trails. The board of directors also approved $200,000 for a pilot mini-grant program that launched in FY18.

Main Avenue and Madrone Pipelines Restoration: Construction began in FY18 and is scheduled to be completed in FY19. Once completed, this project will increase our groundwater recharge by about 2,000 acre feet per year and maximize the delivery of imported water to treatment plants supplying drinking water to North County. 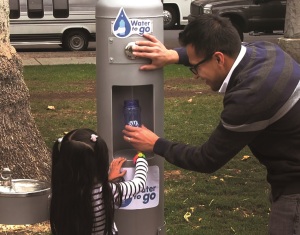 San Francisquito Creek Flood Protection Project: Construction of the San Francisco Bay to U.S. 101 portion of the project began in FY16 and is targeted for completion in FY19. The section that is upstream of U.S. 101 is in the planning and design phase, with construction of the portion funded only by local and state funds planned for completion by FY21. Once completed, this portion of the project will protect approximately 3,000 parcels in Palo Alto from a flood similar to the February 1998 flood, the largest on record for this creek.

Permanente Creek Flood Protection Project: Construction of the Rancho San Antonio and McKelvey Park detention sites and channel improvements began in FY17 and are on target for completion by FY19. Once completed, this project will provide 1 percent flood protection to approximately 1,664 parcels in Mountain View and Los Altos.

Upper Berryessa Creek Flood Protection Project: Channel construction work was completed in FY18 and the final phase of the bridge replacement project is scheduled for completion in FY19, one year ahead of the current project schedule. Once completed, this project will provide 1 percent flood protection to approximately 1,662 parcels in Milpitas and San José.

Coyote Creek Flood Protection Project: After the project was modified in FY17 to extend the project to Tully Road, the water district identified and constructed a short-term flood relief solution for the Rock Springs neighborhood prior to the 2017-2018 winter season. Once completed, the preferred project will provide flood protection for approximately 1,000 parcels in San José from the level of flooding that occurred on Feb. 21, 2017.